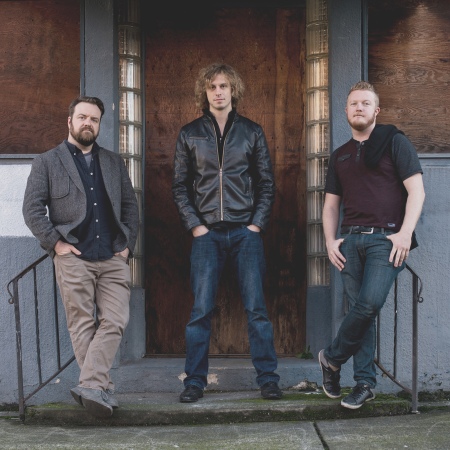 Ryan McKasson (fiddle), Elias Alexander (bagpipes/vox), and Colin Cotter (guitar/vox) are well-versed in the Celtic music tradition, and the music that they write and perform as the contemporary Celtic-American folk trio, MAC, is steeped heavily in this timeless tradition while also calling upon influences ranging from rock to classical. MAC’s performances reveal fiery personas tempered with artistry, finesse, and virtuosity as they draw from a deep well of innovative original music and lush arrangements of traditional songs and tunes.

Ryan is a Scottish fiddler (former National Scottish Fiddle Champion) and tune writer from Seattle who tours with a number of well-known bands around the world. He is also in demand as a recording artist, appearing on two of Hanneke Cassel’s albums as well as on Alasdair Fraser & Natalie Haas’ album, “Highlander’s Farewell.”

Elias is a multi-instrumentalist and singer, originally from Ashland, Oregon, now living in Boston. He tours nationally and internationally with several projects, and has performed with greats such as Carlos Nuñez, Alasdair Fraser, and Gillebrìde MacMillan. He is also a regular faculty member at Alasdair Fraser’s Sierra Fiddle Camp, as well as being in demand for other music camps around the country.

Colin is a guitarist, fiddler, singer, and songwriter who has toured internationally as the front man in bands and as a guitar accompanist to traditional fiddlers of varying backgrounds. He has released 4 studio albums largely of original music, has shared the stage with the likes of David Bromberg and Alasdair Fraser, and is a regular faculty member at Alasdair Fraser’s Valley of the Moon Scottish Fiddling School and the Mike Block String Camp.