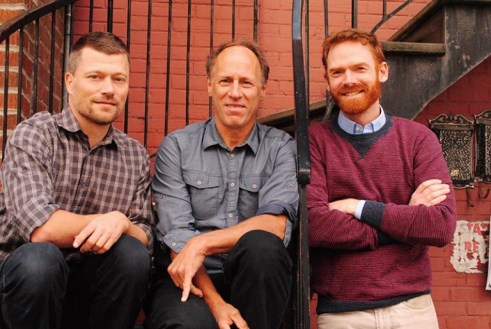 Triton is made up of Timothy Cummings, Jeremiah McLane, and Alex Kehler. three high-powered traditional musicians. As a trio, their performances are unified by their zeal and musical craftsmanship, and punctuated with brief commentary on the music and their instruments. Now known as Triton, this rare, captivating ensemble inspires both feet and spirits to dance, and is simply not to be missed.

About Timothy Cummings
Timothy Cummings is a Vermont-based composer and multi-instrumentalist (chiefly a piper) who enjoys an uncommonly diverse repertoire. His music spans from contemporary and sacred music to the traditional melodies of the British Isles, Appalachia, Cape Breton, Brittany, and beyond.

About Jeremiah McLane
Jeremiah McLane is a Vermont-based composer and accordion player with strong New England roots. After an early formation in classical piano, Jeremiah spent his teenage years playing blues and jazz. It wasn’t until his mid twenties that Jeremiah began to immerse himself in the world of traditional Celtic and French music, studying accordion with Jimmy Keene and Frederic Paris. He then spent several decades traveling in Europe, doing field research that laid the groundwork for a Master’s degree he received many years later from the New England Conservatory.

In 2005 Jeremiah started the Floating Bridge Music School, which is devoted to teaching traditional music from the British Isles, Northern Europe, and North America. An adjunct instructor at the State University of New York in Plattsburgh, NY, he also teaches at the Summit School of Traditional Music in Montpelier, VT, at the Upper Valley Music Center in Lebanon NH, and at many summer music camps including Ashokan Fiddle & Dance, Augusta Heritage Arts Center, American Festival of Fiddle Tunes, and the Maine Fiddle Camp.

Hailing from the Eastern Townships of Québec, Alex Kehler is a multi-instrumental string player. His McGill music training as a baroque violinist makes him a versatile traditional fiddle player.

Over the years, his passion for Scandinavian music has made him a rare bird in North America, playing the Swedish nyckelharpa. He has had the opportunity to study with two renowned Swedish teachers, Torbjörn Näsböm and David Eriksson. He also plays låtmandola, the Swedish equivalent to the Irish bouzouki.